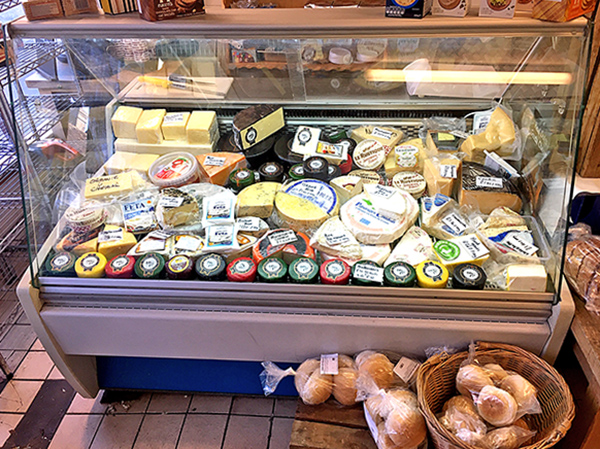 Wide range of British and Continental cheeses
We pride ourselves on having one of the best cheese counters in the area and always have in stock a good selection of French and continental varieties. We also have a very wide range of British and local cow-, sheep- and goats-milk cheeses. More and more new, excellent quality British cheeses are being developed and it is said that this country now produces more varieties than France. Why not pop in and try something new? For those of you have an intolerance to cows’ milk, or simply like the flavour of goats milk, we have many varieties of goats’ cheese including a new one from Norfolk Mardler.

Local Cheeses
Suffolk Gold and Suffolk Blue: These cheeses are made from a Guernsey herd on a farm at Creeting St. Mary just over the border in Suffolk.

Traditional Cheeses
Lincolnshire Poacher: A firm, unpasteurised, cheddar-like cheese. Strong, earthy flavour and has won many awards.
Black Bomber: Our most popular award winnin extra mature Cheddar made by the Snowdonia Cheese Company.
Hereford Hop: Based on a Gloucester recipe, relying on the rich creamy milk from herb rich local pastures. Once matured for 3 - 4 months the wheels are coated in toasted Hereford hops.
Suffolk Gold: Made exclusively from cows milk, this cheese has a lovely golden straw colour and a rich taste. The curds are pressed and allowed to dry for 24 hours then the cloth and band are applied to the rind using warm vegetable fat, this protects the cheese and retains moisture and taste.
Quickes Mature: A traditional, firm, robust flavoured cheddar from the south-west.
Colston Bassett Stilton: The king of English cheeses, made by one of the last independent Stilton makers.
Wensleydale from Hawes: The real thing, produced in the Dale itself.
Cheddars: Black Bomber, Montgomery and Quickes - mature and very well flavoured.
Poacher - well flavoured and unpasteurised
Wookey Hole - the only British cheese to be matured in caves.